For many years now, Australia has been plagued by an increasing culture of people acting in a cowardly manner and king hitting victims.

Many of these king hits have resulted in young people dying from hitting their heads on the road or pavement after being knocked out. Government, Police and many celebrities have worked hard to inform people about the dangers of king hits, and to try and stop this cowardly behaviour. 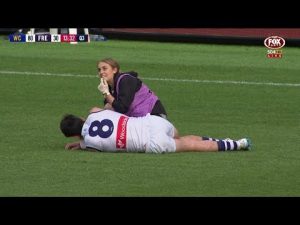 Unfortunately, cowardly king hits are still occuring, with many of us witnessing a cowardly king hit on the weekend when West Coast Eagles player Andrew Gaff, king hit a young Fremantle Dockers player, breaking his jaw and knocking out his teeth. The incident was ugly and witnessed by thousands of young children who look up to AFL players as role models.

But it amazes me how a cowardly king hit on a sporting field that breaks someones jaw & teeth, is somehow exempt from criminal charges because its under the name of sport. Andrew Gaff, after punching the Fremantle player was permitted to continue playing for the remainder of the game and he has not been charged by Police.

The mentality that because its sport, serious assaults should be kept on the field and dealt with in-house are just ludicrous. If we are going to stop the cowardly king hit mentality in Australian society then we need to start with sport and any player in any sporting code must be charged with assault by police if they king hit someone.   But its hard to imagine how sport, in particular the AFL, changing when you hear comments like these from West Coast Eagles chief executive Trevor Nisbett who instead of condemning his player for the cowardly assault, stated that suggestions of police action were “inflammatory”.

“I am not prepared to go there. Some of those inflammatory comments by some people just are unwarranted because everyone knows we have a process in the AFL and the club will take the process to the tribunal. The AFL will deal with it, the player will get the penalty the AFL tribunal deems as deserved in this case,” he said.

Nisbett’s comments are disgraceful but he isn’t alone in his approach to king hits. Andrew Gaff will most likely be given a 5 game suspension for his cowardly king hit. An insignificant repercussion when you consider he will still receive his full salary, he will not be prosecuted and made to answer for his assault in a court of law and the player who he assaulted and faced surgery, will miss playing football for the remainder of the year and will most likely have some everlasting mental scarring from being knocked out – after all he is only 18 years old!